In these unusual times we are really missing all of our friends, patrons and supporters. To celebrate VE Day, we wanted to share our Remembrance/ Street Party concert from 2018. With thanks to BrassPass.tv who expertly recorded the event, and for allowing us to share it with you.

Below is a short poem written by Janet Clegg:

We'll soon be back
And soon you will see
Us marching the streets
And Carols round the tree.

Enjoy our VE Day music
Clap along to every tune.
Longridge Band miss you
But hope to be playing soon.

We were hoping to make this months draw at the Spring Concert, but during these uncertain times the draw has been completed by Carole Bimson at her home. Carole had the bag of numbers at her house so we were lucky that we could still make this draw!

Thank you to all our members for your continued support, and congratulations to all the prize winners. Your cheques are in the post!

In line with guidance issued at 5.00pm today by Brass Bands England regarding brass band events during the current Coronavirus pandemic, we regret to inform you that we have taken the decision to cancel both our Spring Concert  (Saturday 14th March) at Longridge Civic Hall, and our concert with Wigan Youth Band at St. George's Church, Tyldesley (Sunday 15th March).

In doing so, we seek to reduce the risk to members of both organisations, our supporters and the general public. We do hope to reorganise these events at a future date and thank you for your understanding at this time.

Brass in the Wire Results

The band competed at the Brass in the Wire Contest held at Parr Hall in Warrington on Sunday 26th January. This contest was previously held at the Guild Hall in Preston, but the contest has this year moved to Warrington due to the current closure of the venue in Preston.

We were in the combined First and Championship section and performed the set test piece Legacy by Tom Davoren.

We are now working hard to refine our performance for the North West regional competion, which is held at the Winter Gardens in Blackpool on Sunday 23rd February.

The band have received a donation from the Music Mates charity. We would like to say a big thank you to everyone associated with Music Mates for their generous donation, which will certainly help support our Junior Band. The charity have issued the following statement:

"Following the closure of the Music Mates charity, the committee agreed to donate the remaining funds of £205 to Longridge Band. Specifically, to support the continued development and success of the Junior Band. This donation reflects the purpose of Music Mates, which was set up to help children, young people and families build relationships, unlock their creativity and achieve their potential through music. As a long established, very successful and locally rooted champion of music in the community, we are delighted to make this donation to Longridge Band."

A small group from the band were out carolling on Thursday 19th December, in aid of the Rosemere Cancer Foundation. Thank you to everyone who supported us at Franco's, The Derby Arms, Ferrari's (especially the Rotary Club) and Longridge Golf Club. We're pleased to announce that we helped to raise just over £700 for the foundation. 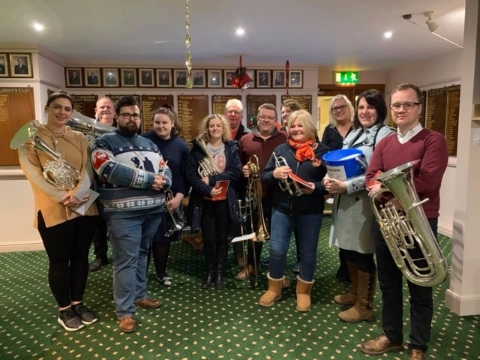 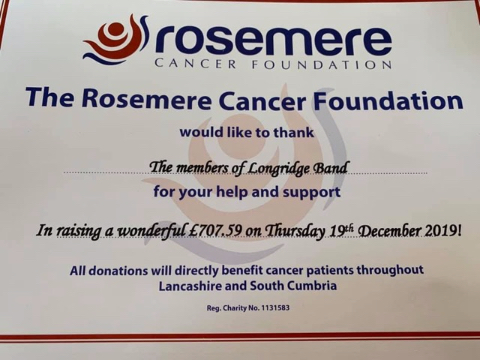 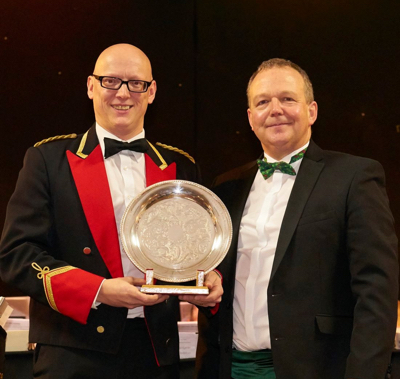 Congratulations to cornet player Glenn Anderton who was this year's winner of the Bill Bigley Award. This award is voted for every year by the band members and was presented by Mark Peacock at the Christmas concert.

We urgently needed a horn player for the Wychavon contest in November. Glenn kindly offered to 'give it a go!' and played brilliantly on the day.

Our next concert is the Spring Concert at Longridge Civic Hall on Saturday 14th March 2020. At this concert, all the programme is chosen by our patrons.

If you are a patron, and would like to request a piece, please fill out the form here asap:

If you are not currently a patron, please see the 'support us' section. Our patrons scheme starts from £30. As a patron you also get free entry to this concert.

The 100 Club was drawn by Nigel Evans at the Christmas concert on Saturday 7th December 2019.

Thank you to all our members for your continued support, and congratulations to all the prize winners. Your cheques are in the post!